There’s a bandwagon that everyone is jumping on and it just so happens to be the Carolina Panthers.

When Ron Rivera and Cam Newton joined the franchise in 2011,
the team’s Facebook page had only 171,960 likes.

Fast forward to February 1, 2016 and the Panthers’ fan page has increased its audience by over 1100% with
over 2 million Facebook likes!

So let’s go back to the 2011 season, when the Carolina Panthers’ franchise debuted its makeover, with new head coach Ron Rivera and fresh quarterback Cam Newton. The 2011 season wrapped up with a 6-10 record, one that needed much improvement. In the years since 2011, Ron Rivera and his staff have built a team destined to win football games, with Cam Newton front and center.

It’s been a long time coming, developing a team that can consistently win football games – but the Panthers’ 15-1 record is proof that 2015 has been the breakout season for the Carolina Panthers. 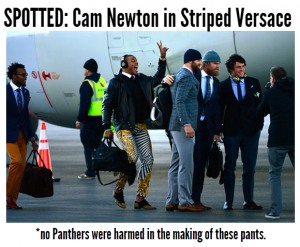 Panthers’ apparel is selling out nationwide, and so are Cam’s signature Versace pants.
Click Here to Order Your Own Pair!
Carolina fans are emerging from remote places coast to coast! But all the fanfare hype isn’t just about their outstanding record – a lot of it has to do with the atmosphere surrounding the entire football team.

So, how have the Carolina Panthers gained the reputation as one of the most marketable teams in the NFL…?

The Carolina Panthers have created a brand awareness
that goes beyond a recognizable logo.
Their celebratory dances are an example
of how they were able to create
a viral following.

The Panthers’ were only a “dab” away from going viral – and that’s when Cam Newton threw for a touchdown and began the dance that would define the Carolina Panthers. 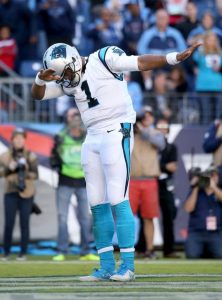 The Carolina Panthers found a unique way to identify themselves as a team through the way they celebrated. It went beyond your typical end zone behavior when Cam Newton 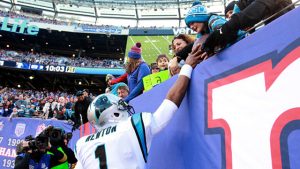 began handing off game balls to fans in the stands after putting points on the board. It’s been such consistent behavior that you can expect it from Cam Newton and the Carolina Panthers. The team has established the expectation that they will “dab” in the end zone and then give the football to a lucky kid in the stands.

The way the Panthers celebrate is a display of their strong team spirit; which is the backbone of their brand.

Jump On The Bandwagon:

Click Here to Watch Fans Cheer as the Carolina Panthers Depart for Superbowl 50.

By impactmedia|2016-02-01T15:24:23+00:00February 1st, 2016|Cool Stuff, Facebook Marketing, Marketing, Uncategorized|Comments Off on How the Carolina Panthers Became the Most Marketable Team in the NFL